THE STAB CADDY: ALEJO MUNIZ’S US OPEN BOARD by : STABMAG.COM 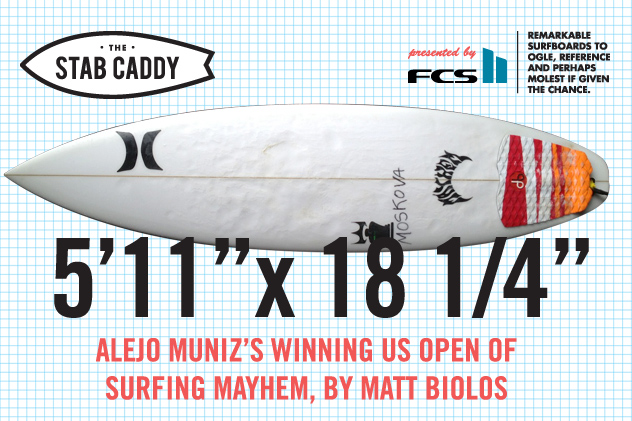 Last month, Alejo Muniz won the Vans US Open of Surfing (no assumed knowledge here!). And he did it on a board shaped by Matt Biolos, whose crafts you may know as Mayhem, or most definitely as …Lost. When the tour rolls into town, any man who ain’t contractually (or otherwise) locked into a board company comes knocking on Matt’s door for a blade. This is because, even though his creations perform well anywhere, Mr Biolos does California quivers better than anyone.

“Alejo was riding a V2 Shortboard,” Matt tells us after the trophy has been raised to the heavens above HB. “It’s a new prototypical board I’ve been working on for about six months with a lot of people, including myself. It’s the same model that Julian rode throughout the event. It’s an all-new rocker.”

In the opening rounds of 96 and 48, Alejo slips through with second places. But he wins his round of 24 heat and starts getting a steam on. The V2 powers through flat spots and shaves lips with equal panache. Alejo seems to have a little more pop in his giddyup. He beats Mitch Crews in the Round of 24, Nat Young in the quarters, Matt Banting in the semis and faces hometown hero Kolohe Andino in the finals. Who’s also riding a Biolos handshape. In fact, Kolohe’s on the team. And once Alejo topples Kolohe’s 14-point combo with his own 16-point combo, Matt is left in a bittersweet position. “It’s a bit conflicting to shape boards for surfers that compete against your team riders,” Matt says immediately after the final. “Alejo doesn’t get boards from me all the time and he just beat Kolohe, one of my team riders. I’ve never been so split-hearted as I am right now with winning a contest. I mean, we just won the US Open, but y’know, my heart was with Kolohe, of course.”

It’s a position Matt has been in before, and he had to make a definitive call. “We actually made a statement with Carissa,” he says of Ms Moore, who’s been riding Mayhems for, like, ever. “Tyler Wright won Brazil on a board I made her, then she wanted to get more boards and even without talking to Carissa and Shane Beschen, I made a commitment to myself. These two girls are in a title race and I’m so deeply invested in Carissa emotionally, so I told Tyler I wasn’t gonna make her boards. She ordered like six boards and I said, “I can’t do it, I’ve gotta win or lose this title with Carissa. That was a hard decision. And when I made that decision, 100 people said, “Are you out of your mind? You’re turning down making boards for the number one woman in the world?” And today, it looks like it paid off. Carissa won the event, got two places further than Tyler, who was riding that same board again, ironically, and now Carissa’s back in the lead. So, I’m not afraid to put my balls on the line and make a hard decision or statement like that. But, after seeing what happened in the final, I’m sure Dino and I are gonna have to talk about what the mode of operation should be, moving forward.”

So, what shall be discussed? Will Matt’s hands be cuffed only to boards for team riders, paying Johnny-Smiths and disguised tour surfers? “I don’t know, it’s up to Dino and Kolohe what we do,” says Matt. “I work with Dino every day and he’s never made a fuss about doing boards for other people. There’s really only about five shapers making boards for most of the tour guys. Y’know, we all make boards for a lot of people.”

The model that Alejo tasted victory on ain’t dropped yet, but when it does, we shall let you know (right after we’ve ordered a coffin-full ourselves).