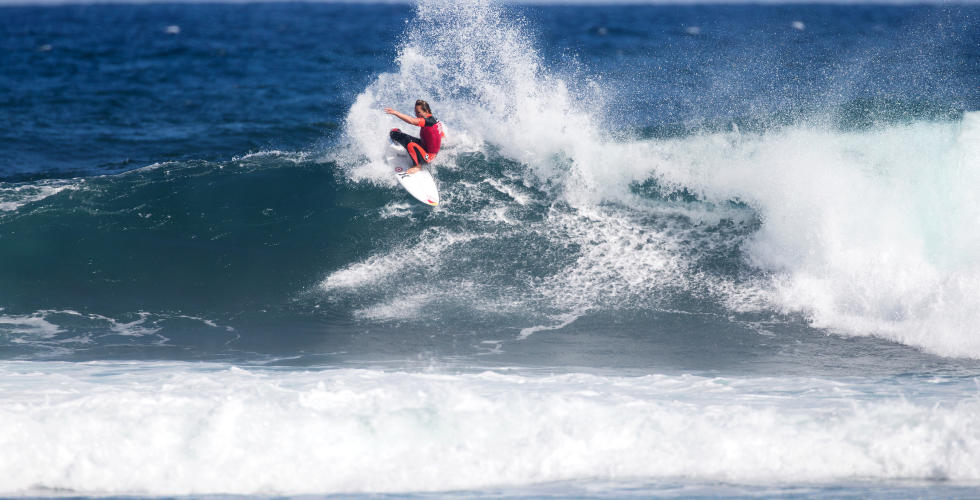 Moore’s Western Australian victory vaults the young Hawaiian back into the ratings’ lead, which she currently shares with Stephanie Gilmore, heading into the final event of the 2014 Australian leg – the Rip Curl Women’s Pro Bells Beach.

A consistently-acknowledged component in elite surfers’ programs is quality equipment and a positive relationship their respective board builders. Moore began riding for San Clemente icon Matt ‘Mayhem’ Biolos in 2009 and the results since have been staggering: 10 elite WCT wins (on Mayhem boards), two ASP Women’s World Titles and countless endemic and mainstream accolades. “I don’t even know what model it is – just a Mayhem special. I hadn’t ridden it until the other day and I actually don’t usually ride boards with this much foam in them. But it felt good the other day and I think that, at a wave like Margarets, you need a bit more board to plow through the sections. It felt great.” – Carissa Moore

“It’s Carissa’s own ‘CM-Pro’ 5’11” file design based off the 5’9 1/2″ squash she used last year at Bells. It’s her ‘good wave’ rocker, but I reduced the concave by half so it’s more neutral in the bumps and at high speed. Same width and thickness as her high-performance shortboard, but the added length adds volume by default.” – Matt ‘Mayhem’ Biolos

Biolos’s success didn’t end with Moore either as the Californian had a monopoly on the equipment in the Drug Aware Margaret River Pro Final also shaping for event Runner-Up Tyler Wright.

“Huge congratulations to the one and only @rissmoore10 for yet another convincing victory and stunning display of surfing. Also congrats to runner up @tylerwright for her power surfing performance. I am proud, thankful and humbled to be working with you both and fortunate to call you friends.” – Matt ‘Mayhem’ Biolos (vis instagram: mayhemb3_mattbiolos )

The next stop on the 2014 Samsung Galaxy ASP Women’s World Championship Tour will be the Rip Curl Women’s Pro Bells Beach from April 16 – 27, 2014