…on her surfboard made at the …Lost factory in San Clemente. 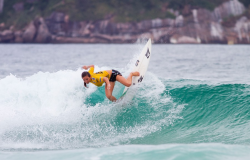 Event No. 5 of 7 on the 2012 ASP Women’s World Championship Tour, the Billabong Pro Rio culminated in a thrilling fashion this afternoon with both Fitzgibbons and Ho exchanging the Final’s lead multiple times before the hooter sounded..

“That was so crazy and Coco (Ho) had me on the ropes for sure,” Fitzgibbons said. “I just had my fingers crossed and knew there would be one towards the end. I made a few mistakes and it happens in Finals but I was able to recover there at the end. I’m so excited.” 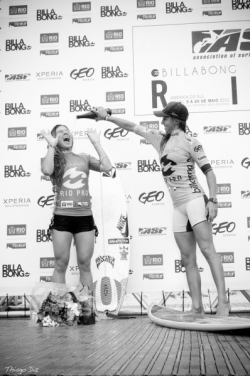 Ho, who was ranked 12th on the ASP Women’s WCT ratings before the Billabong Rio Pro, had yet to advance beyond the Quarterfinals this year, but her Runner-Up finish to Fitzgibbons vaults the young Hawaiian to 9th in the world and restores her confidence to appropriate levels.

“This result really opens things up for me,” Ho said. “I’ve been having a really tough year and I’m stoked to get into this Final. This is my best result of the year and this has been an important event for me. Congrats to Sally on her win.” 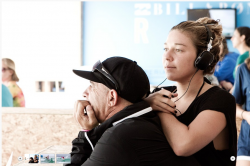 Carissa Moore (HAW), 19, last year’s Billabong Rio Pro winner and reigning ASP Women’s World Champion, was edged out of a hard-fought battle against Fitzgibbons in their high-scoring Semifinal affair. Both competitors posted big-scores in the dying seconds of the heat, but it was Fitzgibbons who earned the best of the exchange, handing Moore and equal 3rd place result.

“I think we all want to make the Final and it’s disappointing,” Moore said. “I’ve lost to Sally (Fitzgibbons)twice this year and I’ve just got to keep trying in the next couple of events and that’s it.” 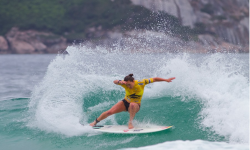 Moore, who was dominant over the course of 2011, has yet to find a win this year, but remains focused on attaining a strong performance to end out the season..

“I think it’s been a bunch of things this year,” Moore said. “I think finding the right waves is one thing overall and I need to switch it up and bring something different out.”