It happens to most of us. We spend our younger years rallying against anything that stands in front of us, running rampant and causing chaos. Surf all day, rage all night and to hell with the consequences. But then society and, to some degree, conformity grab hold and tame our wild ways. Responsibilities rear and priorities pile up. Water time drops down, waist sizes inch up and life settles in. When you do get in the water, the last thing you need is more work, more grief and difficulty. Precious time in the brine should be fun and easy. It shouldn’t add to lifes stresses and struggles. To help make every hard earned and precious session a success, we bring you the “Domesticated Series”: Generous volume boards designed for having a good time… in your free time, and free you from the drudgery of every day dealings. Minimalistic curves and design elements that allow you to capitalize on and control that extra volume to your advantage, both in the line up, and most importantly, on the wave….translating into higher waves counts without sacrificing surfing performance on those waves. That’s what The Domestic Series is all about …good times, fun and easy.

THE LAY Z BOY: (Part one of the Domesticated Series)
Both a continuation and break away from the Plank/Bottom Feeder genre of alternative, fun yet performance minded, surfboards. The LayZboy takes these high volume/low rocker and neutral bottom curves small wave surfboard designs to a wider range of waves and a more versatile and diverse playing field. Using an elliptical , “double ender” influenced outline, the LayZboy is inspired by the boards ridden by guys like Wayne Lynch and Michael Peterson in the 1970’s…as well as Dave Parmenter in the 80’s and 90’s. These elliptical, continuous curve, outlines combined with our proven rocker and bottom curves from the Bottom Feeder and Plank series, create a board that has a very open and forgiving sweet spot (as far as foot placement goes) and can be ridden in waves from knee high to well over head with ease. Because of the narrow hipped, continuous curve, elliptical outlines, you can surf this with a centered stance for down the line 70’s inspired speed runs, down carves and cutbacks…. or step back on the tail and go vertical off the bottom and in the pocket. The bottom contours (mostly flat rail to rail, with rolled, soft edges and a spiral vee under the rear foot) neutralize the high volume and free the board up, making it easy to push and permeate the rail deep and perpendicular into the face of waves… rather than skate flat on top of the water. Paddling? What do you expect… like a Cadillac. 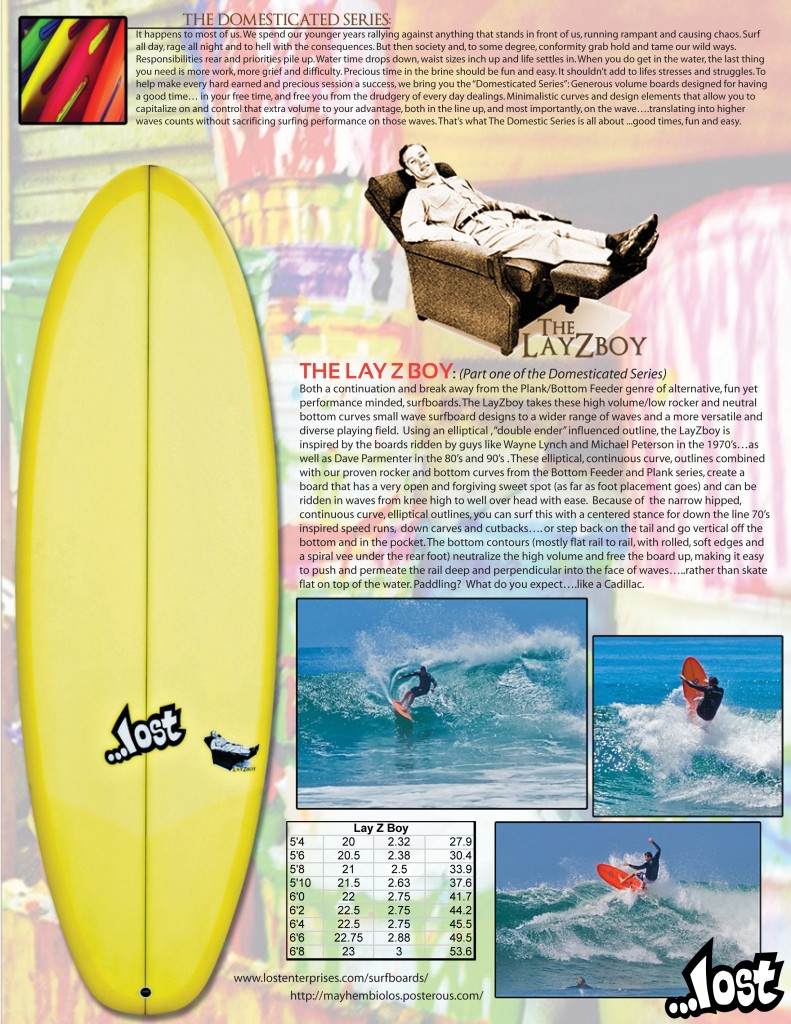 THE COUCH POTATO: (Part dues in The Domesticated Series)
Designed in conjunction with the LayZboy, The Couch Potato in the extreme small wave version of the same general concept. It is wider, shorter, with a flatter rocker and a more parallel, yet continuously curving, outline than its big brother. Designed specifically a small wave surfboard, The Couch Potato (CP) is essentially a grovel version of the LayZboy, with a noticeably
wider nose, with less entry rocker and a fuller forward foil, combined with a slightly wider tail. The outline and rocker combine for a board that is crazy fast, yet still controllable and maneuverable, in gutless surf. A waist high weapon that, like the LayZboy, can be surfed equally effective from both a centered stance or off the tail. Recommend to be ridden 2” shorter than
the LayZBoy or the same size as Plank or Bottom Feeder. 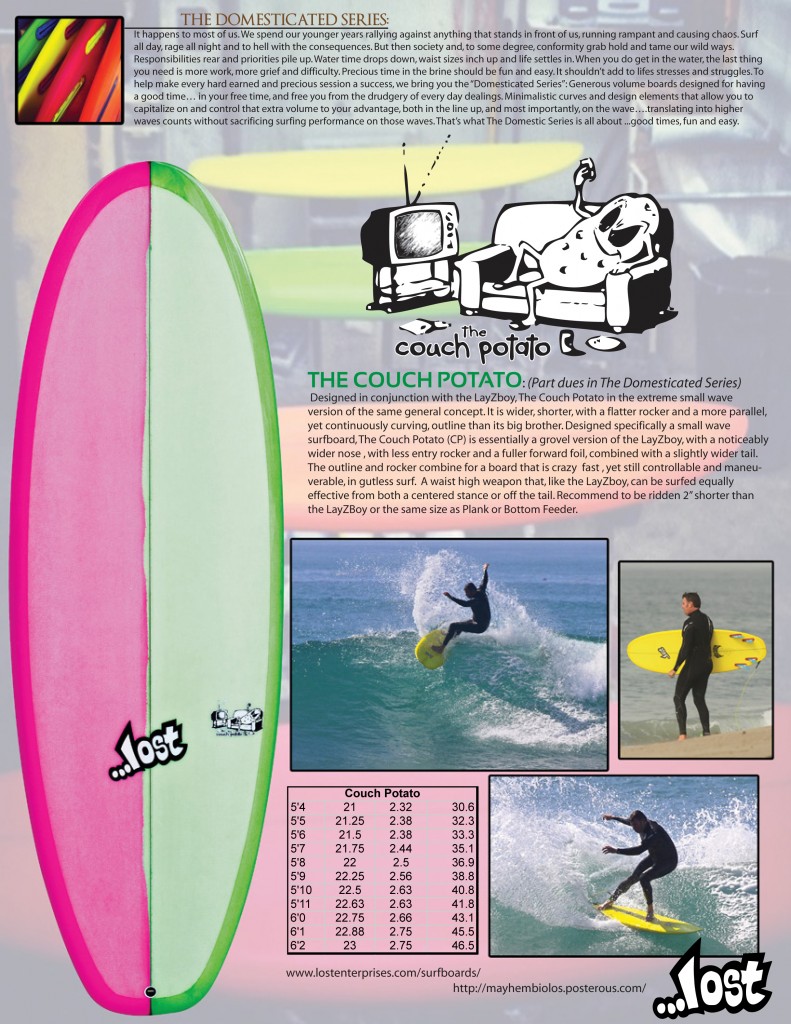