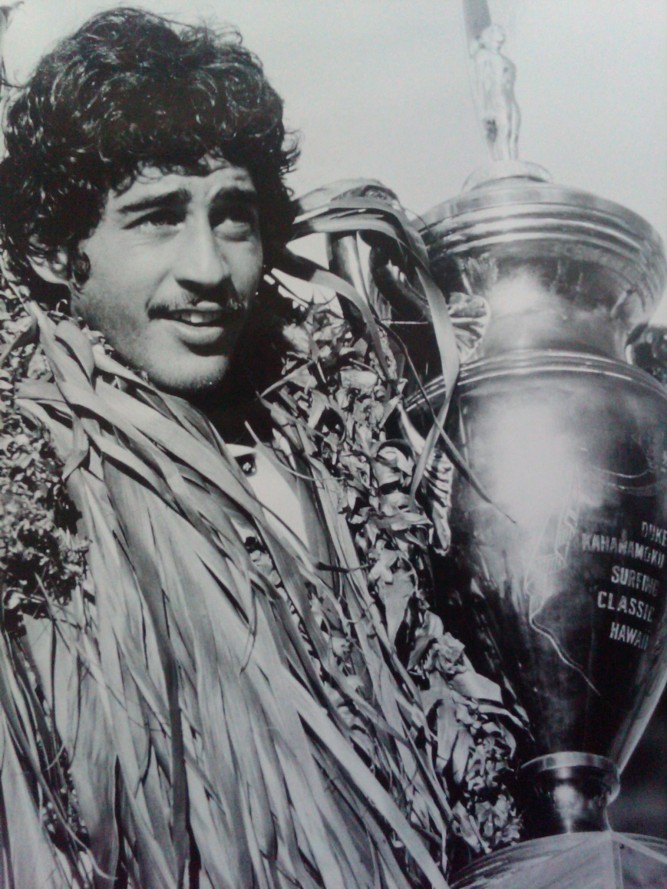 North Shore native and surfing legend Michael Ho has be chosen by voters to be inducted into the Surfing Walk of Fame. Be sure to come out to the US Open (PCH and Main) at 10am on Thursday August 2nd to watch the ceremony and witness history. Below is the official press release from Surfing Walk of Fame

The votes have been tallied and seven legendary wave riders will once again be forever enshrined in surfing’s history books at 10am on August 2, 2012. Through a selection ballot, a host of respected surf industry veterans, former professionals and surf journalists narrowed down a field of hundreds of candidates to name the seven 2012 Surfing Walk of Fame’s honorees in their respective categories – Michael Ho (Surf Champion), Michael Peterson, Dick Brewer (Surf Pioneers), Sean Collins (Surf Culture), Alisa Schwarzstein-Cairns (Women of the Year), George Draper (Local Hero) and Stacy Wood (Honor Roll).

The Surfing Walk of Fame is the only tribunal in surfing to award specific categories as well as require a 10-year margin since the commemorating achievement. This year’s recipients will be cemented alongside past inductees, earning their immortal place in the pavement on the corner of PCH and Main Street, directly across from the famous pier in Surf City USA — Huntington Beach, California.

“The Surfing Walk of Fame board of directors is very excited with this year’s voter-selected honorees for the 2012 induction,” said Don MacAllister, SWoF Chairman of the Board. “For the past 19 years, we mail ballots throughout the world and gather votes to make our selection.”

The late Michael Peterson, regarded by many as the best high-performance surfer during the mid-1970s and winner of the first-ever pro tour contest, shares the Surf Pioneer award with groundbreaking shaper Dick Brewer. Brewer was instrumental in designing boards to fit inside the tube at Pipeline while working alongside Gerry Lopez and Reno Abellira.

Hawaiian legend Michael Ho received the Surfing Champion nod this year. Ho was a competitive force for over 25 years, winning the Pipeline Masters five times and the Triple Crown twice.

The Surf Culture honor goes to the late Sean Collins – largely regarded as the original pioneer in surf forecasting. With 1.7 million unique visitors a month, his company, Surfline, has been in service for over 25 years and is considered the go-to destination on the World Wide Web for surf reports, forecasts and news.

Alisa Schwarzstein-Cairns, this year’s Woman of the Year, won a world amateur title at the age of 15, went on to be named ASP Rookie of the Year and then remained in the ASP top eight for four years.

Here are the voting criterions used to decide each division:

SURF PIONEER – Nominees achieved surfing fame as a respected surfer or pioneer in the time before major championship; candidates must either be at least 50 years old or deceased.

SURF CULTURE – Inductees are nominated from the arts and/or industry, and must have helped create and define surfing culture.

WOMAN OF THE YEAR – Any female who meets the qualification in any of the four categories: surf champion, surfing culture, local hero, or surfing pioneer.

LOCAL HERO – Nominees must have resided in Huntington Beach for at least 10 years, graduated from Huntington Union School District, been a finalist in the surf champion category, contributed to Huntington surfing culture, been a surfing pioneer in the city or a past champion at the annual Huntington Beach City Championships.

HONOR ROLL – Recipients of the honor roll award deserve recognition due to their important contributions to the sport of surfing and its culture, but hey do not qualify under the specific guidelines of the other five walk of fame categories. The honor roll is the only category chose by the walk of fame board of directors.

This year’s honorary induction ceremony will take place during the U.S. Open of Surfing outside of Jack’s Surfboards in Huntington Beach on August 2nd.