Mason arrived in Samoa a few days later than scheduled. He hopped out of the surf resort van and took a look around. His eyes twinkled, he was smiling. This is his only look. Every day for Mason Ho is like a kid’s first day of summer break. Absolutely invigorating. Mason took in his surroundings. Smelled the wild ginger, tasted the sweet air on his tongue and saw the strangeness of a new place. He shook everyone’s hand, threw them back-up shakas, approached a Samoan woman and leaned in to kiss her on the cheek — a common greeting in Hawaii. But Samoans are traditional, quite modest, really, and she shrunk back. But Mason’s eyes were closed and he kept leaning in to make contact. He almost fell forward when he realized his error. Confused, he said, “Oh — you guys don’t kiss here?” The woman shook her head and blushed. Mason stuck out a hand, not embarrassed in the least, and the woman shook it.

He took another step; he could see the sea behind some rooms on stilts. He began to jump, began to crane his neck to see. “Ooooh!” he groaned. “Is that a right out there? Is that the one?!” He cried, suddenly surging with life. He began to skip toward the rooms for a better look. Three young boxer-dogs bounded behind him. Mason turned, lost focus, and played with them. Ford Archbold, Alex Smith and Ozzie Wright walked down from their rooms and Mason saw them all walking towards him. There was surf and dogs and sweet smells and familiar faces — and he had arrived. And arrivals are rejuvenating. Mason let out a hoot. He could see that his life was an arrival. Every goddamned day.

On the right, his surfing is explosive. It’s stalefish reverses and impossible nose-pick tail drifts. Rocky Point-bred radical. We sit in the steamy South Pacific and I ask him who his influences are, his favorite surfers. He answers before I get the last word out, “M.P. and M. Ho,” with a look on his face like, “what next?” Somehow I wasn’t entirely surprised at this answer from the way he pairs obscure, psychedelic Hendrix tracks to all the web surf-clips he releases.

“C’mon. You don’t watch any of the clips from Modern Collective or Lost Atlas for inspiration?” I say.

“Honest to God, I’ve never seen Modern Collective. Never watched any of those flicks. I just do the same thing I’ve ever done since I was a little kid,” he says. “I jump around, amp, go surfing. Just try to be a kid. I watch guys out in the water on the North Shore because they come every winter, but I don’t watch anyone’s movies. But when you’re a kid — you’re psyching. My dad’s still psyching, so I don’t wanna lose that.”

At night I watch Mason sit down and eat with some random guests at the resort. Soon he’s leaning toward his new friends, animated with two arms up pantomiming some kind of surf situation. He’s cackling, laughing with his eyes closed, as is his audience of two.

After dinner on the way back to my room, I pass him on the phone and overhear him talking to a girlfriend, perhaps.

“Why haven’t I called? Uh…there’s no phones and Internet around here — such a jungle! I had to ride a horse along a beach and cross a river to the next town that has a phone to call you…What kind of horse? It was a white stallion,” he says into the phone. He nods as I walk past him, smiles and winks. 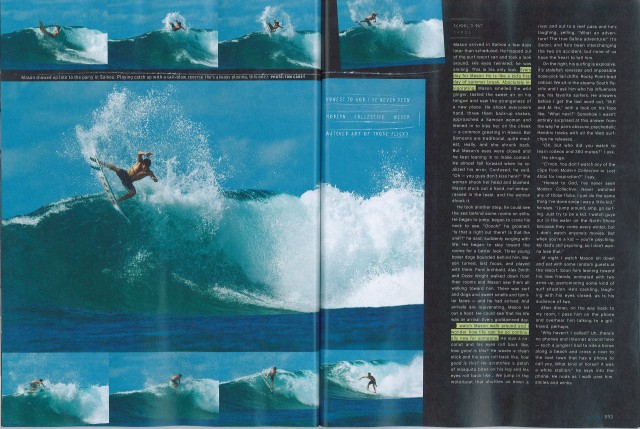 On the night before the 2008 World Juniors Expression Session, a night of debauchery unraveled that could only be initiated by the likes of six shameless girls from North Narrabeen. I repeat, a night like only six Aussie girls could give.

“I would run this game — worked every time — where I’d get to the beach with my boards,” says Mason. “I’d scan the beach and just fully look for the pack — the hot pack of chicks, just march right up to them and be all, ‘Hey girls, how are ya? Listen, I gotta practice for my heat, and I’m not from here and I don’t know the area very well, so could I please leave my extra boards by you guys while I surf?”

“Where are you from?” they’d ask. To which Mason would reply, “I’m from Hawaii.”

“And then I’d be like, ‘OK, well just don’t leave until I get in!’ Then I’d go surf, come back, scoop all the numbers old-school style — full pen and paper! And I’d gather all the papers, fold ‘em up and stuff ‘em in my leash key-pocket. And we’d be set for the night.”

The evening before the 2008 World Juniors final day, Mason and five other reputable, young Hawaiian surfers were set for the night. Drinks were drunk. Women squealed, men hooted. One of the reputable, young Hawaiians was deflowered. Aussie girls, right? In the morning, hung over but not quite partied-out, news spread that there was an expression session commencing shortly — with no Hawaiians in it. Tonino Benson, who’d made the finals of the entire comp, wasn’t even invited. Mason and the group of reputable, young Hawaiians were furious. Mostly Mason. He convinced Granger Larsen to charge the contest site with him and demand entry. Mason approached Luke Egan (apparently the man in charge) and Luke said it was ‘out of his hands.’ Mason gave Luke a poignant grom-guilt-trip, to no avail.

Mason stomped away, cursing, and was nearly to the parking lot when he heard his and Granger’s names being called in for the heat. Mason had no board, no wetsuit or boardies. Really, he’d just come to bitch. He grabbed a jersey (tied it well above his belly button), grabbed a board from his sis and jumped in with his walk-shorts on when the horn blew. He hit the water and his shorts ballooned, the cotton like a wet burlap sack. “The perfect excuse!” he recalls. So he shed his shorts and surfed the full 30-minute heat in front of hundreds of spectators, photographers and filmers — naked. He did a ton of airs, showed up Julian Wilson in the process and landed a very inverted backside air-reverse. He was not shy. He had a whole lot of fun. He even placed second, to the dismay of many event directors. He caught one in and walked up the beach in front of a cheering crowd, in front of many, eager Aussie women. Many of them the same women who’d accompany him on yet another bacchic night that very evening.

I ask Mason the most common and, frankly, boring question writers always ask their subjects: “What are your goals for the future?”

He pauses for a beat and this is his reply: “I’ve never thought of that question before.”

“Are you f–king serious?” I ask. But this question is rhetorical. Hawaiians typically aren’t big on sarcasm and, plain and simple — they say what they mean.

He smiles and laughs, “That goes against my philosophy.”

“You have a philosophy?”

I slide the recorder a little closer.

“There’s a lot of things you can learn from Jeet Kun Do. Probably my favorite — what I try to practice every day, that goes along with your question — is staying in the moment. Don’t think ahead too much or dwell on the past. Stay present.”

We sit on a park bench by T-Street in San Clemente. It’s Sunday, there are small clean lines and a few surfers out.

“Surfing is my Jeet Kun Do — my defensive martial art,” he says.

We watch a random tow-headed grommet hop down a wedgy little right. Two other kids watch him from behind the wave. We watch from above. The kid connects with a section and throws his board out in front of himself, falling backwards.

“Like that right there,” Mason says, pointing to the kids. “Stay low, don’t overbalance. I have no idea how to fight, but I use that for surfing. It’s Jeet Kun Do. Finding your stance and staying low. If you stay low and stay above your board — you can land anything. If you didn’t land it, it’s because you didn’t do one of those two things. Simple as that.” 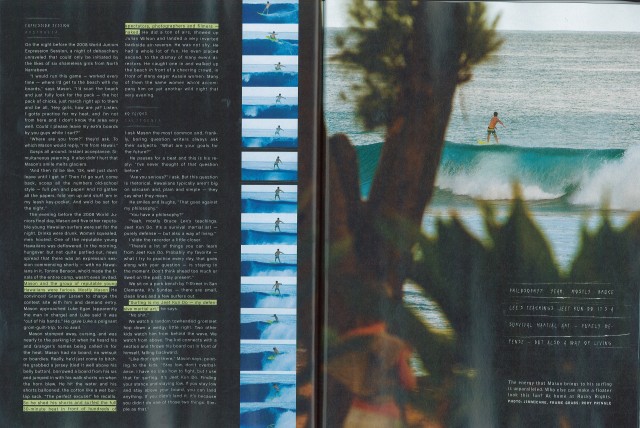 “You can overbalance?” I ask.

“Sure. When you blast that air and spin, and land backwards on a lip — don’t fight it. Be like water and drop with the wave. Flow with it; that’s gettin’ groovy,” he says.

“Gettin’ groovy,” I repeat. And a vision of Jimi Hendrix, of ty-dye colors and purple smoke flashes through my mind. I shake my head, snap out of the daydream and ask, “What’s gettin’ groovy mean to you, Mason?”

“It’s just looking down at your board and gettin’ groovy. You know my head-checks, right?” he asks.
I do. I always thought the head-checks or quick looks to his deck were just an amusing throwback move from the ‘70s he’d incorporated into his repertoire. I’d thought it was for fun.

But he’s standing up now, enthralled in the moment. He’s low and bottom turning on a bomb at Pipe under the spring San Clemente sun in skate shoes. His eyes are wide, he’s practically spitting. “So you’re gettin’ groovy, just letting your board and the wave do their thing, right? You’re riding it out, when all of the sudden that’s when the Johnny Boy [Gomes] comes out and you’re like, ‘WHAT!? Am I spacing out — what’s this?’” 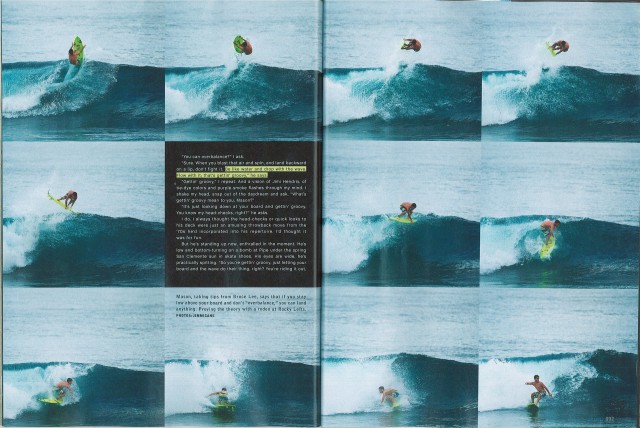 He’s yelling, now. “And you don’t even know what the lip looks like but you just wanna crack it! And you don’t care if you make it or not ‘cause it’s that surprise that you’re amping on…” He calms down, relaxes his shoulders and says, “Listen, when you get a good wave, trust me. Just look down at your board, get low, find a groovy little stance that feels good for you and you’ll see. You’ll see.”

“Do you have a girlfriend?” I ask him.

“What about the one you rode the white horse to in Samoa?”

“Had to clip her — I was almost falling for her,” he says.

“Maybe. I love chicks, don’t get me wrong, but when you start wifing them…that’s when you start to forget who you are. All the sudden you start thinking wacky thoughts — about surfing in Town and other craziness. You start living less in the moment,” he says. “One day I’m sure I’ll settle down but for now…”

“It’s against your philosophy,” I say.

“Don’t favor anything. Don’t favor rights too much, don’t favor the lefts, airs over turns, too much of the same woman — favor nothing,” he says.

And at the Same Time
California

“Mason,” I asked him, “What does surfing feel like to you?”

“Hooo,” he uttered and stuck out his hand to give me a high-five. He was congratulating me on my question. Classic Mason. And he said, “Getting in the water,” he paused for a moment, “everything is both forgotten and remembered.”

We stared at the sea. A south swell was building.

“You get in, you forget about the world for a little, and at the same time you remember how to be a kid. It’s new every time.” 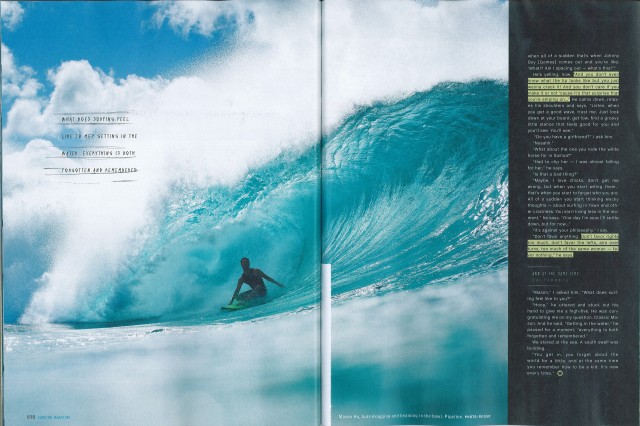 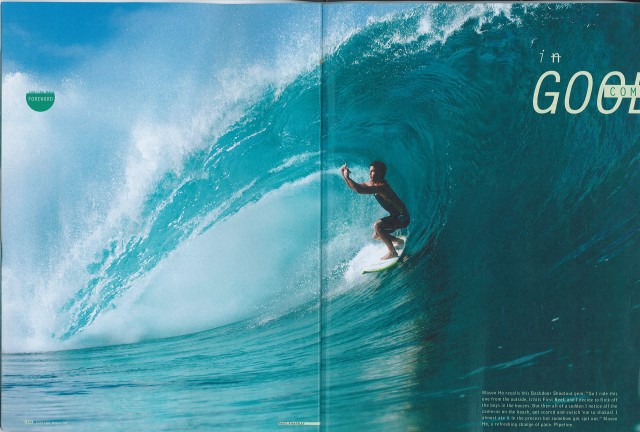 Opening editorial shot of Mason during the Backdoor Shootout at Pipeline this year.