THE TAJ BURROW COLLECTION: Designed specifically with input and feedback from world tour veteran and high performance surfing icon, Taj Burrow. This collaboration/collection stems from the work done to satisfy TBs needs for his trademark brand of razor sharp and explosive, cutting edge competitive and free surfing. With two World Tour wins (Snapper Rocks and Steamer Lane) in our first full season (2012) of working together, the results more than speak for themselves.

WHIPLASH X TAJ: Using the classic “Whiplash” model as a starting point, this board has now become the most refined and streamlined design in our line. Based of of TBs winning board from the 2012 Quiksilver Pro (Snapper Rocks) it is relatively low volume board , with continuous rocker (to fit where ever TB wants to go on the wave) and deep concaves (for lift and the speed to get there). A relaxed central rocker maintains speed and carry through the flats, while hyper-extended tail kick in the last 16” and a moderately lifted nose keep the board free, loose and responsive. The outline also has an aggressive, continuous curve, cutting out all the unneeded surface area, thus no hip or bump in front of the fins that most of our boards feature. The nose, while not as needle or narrow as in the past, is still pulled enough to not get in the way of TBs fast and critical, tight radius turns. Although not for everyone, this board is relatively easy to ride and is best for younger and fit surfers who are above average, have no problem creating their own speed, and surf regularly in punchy beach or decent quality point breaks and want to surf as critical and radical as possible.

THE BEACH BUGGY… BY TAJ:Derived from the Whiplash-TB. The TB-Stepdown is more of an “every-mans” high performance shortboard. Used by many WT and Qualifying Series competitors, because it works equally well in small junk surf. Featuring the Same WL-TB, hyper extended tail rocker (for tight radius arcs off the back foot) but a significantly more relaxed entry rocker, which combined with a wider nose allows for more drive and forward momentum , and stability, with a bigger landing platform from reverse and tweaked airs. A wider hip and tail block is added to the outline in the tail for more lift at low speeds, but the tail width at 12” is relatively the same as the WL- TB. This allows for superior precision and control than most all other “grovel” boards. With the centerline and rail volume is carried farther into the rails….and out to nose and tail the TB-stepdown is designed to be ridden 1-2” shorter than the WLashTB. In the right size, this is a HP shortboard that can be ridden and enjoyed by most surfers of average to above average ability… not just for skinny kids and pros. 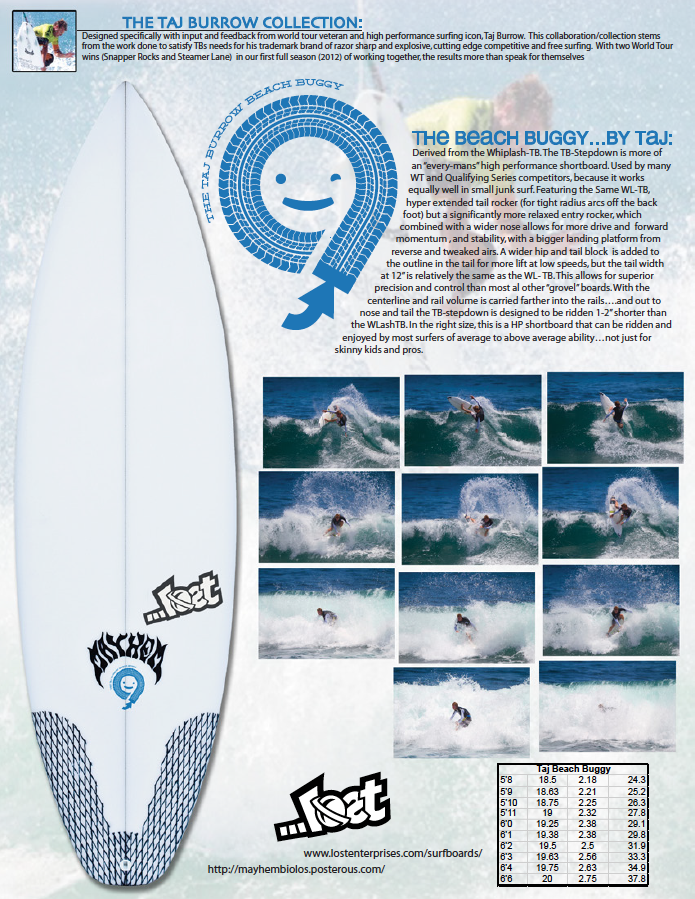